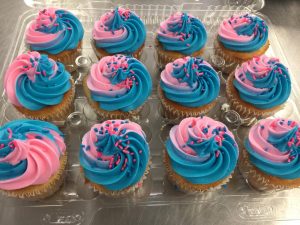 Celebrated at an earlier stage in pregnancy than a baby shower, a gender reveal party announces whether expectant parents will be giving birth to a boy or a girl. This practice has become most popular in the United States and it’s almost impossible to avoid these celebrations being touted on social media.  At their 20 week scan; the point at which it is usually possible to tell the sex of the baby – some couples will ask the sonographer to write down “boy” or “girl” on a piece of paper and put it in an envelope. They sometimes give this to a trusted friend or relative who may organize the gender reveal party.

The gender reveal party has become a mammoth accompanied by a myriad of opportunities to spend copious amounts of money and receive tens of thousands of clicks on Instagram. Guests can demonstrate their gender predictions by wearing pink or blue apparel, then play games before the big reveal. Activities include balloon reveals, glittery powders, sprinkles, guessing games, silly string, appetizers and desserts with color themes, family pets, and colored smoke cannons. Search engine research turns up a plethora of gender reveal party themes and purchases, with names like tutus or touchdowns.

Gender reveal parties have also taken a deadly turn. ‘Celebration explosions’ which became popular  at these parties started a wildfire in Northern California in the fall of 2021 that raged out of control, destroying numerous homes and lives. A pink-and-blue smoke cannon backfired hitting a father-to-be in a very sensitive area and causing significant medical injury. Another couple inadvertently created a pipe bomb that exploded, shrapnel killing a woman 40 feet away. The worst kind of parties have included exotic animals including an alligator and a hippo that were given blue or pink Jell-O to consume, by the parents to be.

Tragicomic reality show features aside, are gender reveal parties even okay for mental health? Projecting gender perceptions becomes especially thorny when you take into consideration that globally, one in every 1000 to 1500 children is born with a visible form of Difference of Sex Development (DSD), which means being neither entirely male nor female, since the chromosomal/genital makeup falls somewhere in between.

In times where the concept of ‘toxic’ masculinity is being dissected and debated, the rights of transgender people have been jeopardized, when an increasing number of young people are actively choosing not to identify with traditional heteronormative norms,  many women have expressed high levels of anxiety about reproductive rights, and mental health professionals caution against calling girls “my little princess,” the very idea of gender reveal parties seems more reckless than quaint.

The importance of rituals and celebration
Most expecting parents will tell you that the prenatal period is arduous. Even without any pre-existing or emerging medical problems, prenatal care, cautionary tales, financial worries, plans and schedules, the earnest and huge amount of information about what to expect when you’re expecting, incredibly personal questions fielded from friends and family, and feeling like an alien is taking over your body, it is not what most parents-to-be describe as a fun time. The couples I see in my practice have described gender reveal parties as a chosen “hurrah” during the prenatal time when nothing else is fun and games. 
Rituals are often created for times of stress, states Dr. Nick Hobson, a clinical psychologist who studies worldwide customs and rituals. It is human to be drawn to rituals. From picture day at school, to proms, graduations, bachelorette parties, wedding rehearsals, baby showers, and coming of age ceremonies, rituals are used to mark time and place. Rituals are a freeze frame of moments that feel profoundly important.

The psychology of prenatal celebration
In indigenous cultures, a woman’s pregnancy and birth were the responsibility of the entire community rather than an individual family event. The community was expected to support the mother in pragmatic prenatal and antenatal care, including emotional and spiritual support. There was a connection to the environment and nature, as well as community. In the Mohawk language, the word for midwife is Iewirokwas, or “ birthed from earth and water.” Around the world, cultural practices around birth, including ceremonies for welcoming and celebrating the new life and sharing of traditional knowledge and teaching for parenting, helped establish strong community roots for the mother and newborn by encouraging a sense of belonging for the family and feelings of support. Historically, celebrations included offerings of food to help the expectant parents cope with busy schedules, child care for other children in the family, chanting and singing, drumming, smudging, and blessing rituals.

While gender reveal parties, where cakes can run as much as $1000, may create a sense of recognition and importance for the parents to be, there are numerous meaningful ways to show support and to help assuage very real fears of what it means to embark on the hard job of parenthood. Tiny humans who later decide they would rather wear gray and black may also want (parents) to skip the glitter.