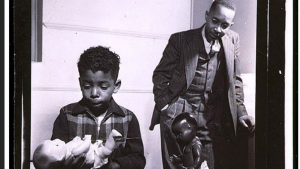 A quick look at research into disparities in need for services and access to mental health treatment.

1946
In the 1940s, psychologists Kenneth and Mamie Clark designed and conducted a series of experiments known colloquially as “the doll tests” to study the psychological effects of segregation on African-American children. Drs. Clark used four dolls, identical except for color, to test children’s racial perceptions. Their subjects, children between the ages of three to seven, were asked to identify both the race of the dolls and which color doll they prefer. A majority of the children, BOTH black and white, preferred the white doll and assigned positive characteristics to it. The Clarks concluded that “prejudice, discrimination, and segregation” created a feeling of inferiority among African-American children and damaged their self-esteem.  The findings were presented to the American Psychological Association about the crisis in mental health for Black children.

2016
In a study published in June 2016, in the Journal of Health and Social Behavior, Princeton doctoral graduate student Heather Kugelmass used voice actors to record phone messages for 320 New York City-based psychotherapists, each asking for a new patient appointment. The psychotherapists, all of whom had doctoral degrees and were selected from the directory of a large HMO, each received calls from one black middle-class and one white middle-class caller, or from one black working-class and one white working-class caller. Each caller mentioned symptoms of depression, mentioned that they were covered by the HMO health insurance plan, requested a weekday evening appointment, and asked the therapist to call back with possible appointment times. Kugelmass varied the names, wording and accents of the callers to suggest race and class. Overall, she found that 44 percent of the voice messages were returned, and that 15 percent elicited a clear appointment offer from the therapist.  Importantly, offer rates varied by race and class—the therapists offered appointments to 28 percent of white middle-class callers but only 17 percent of black middle-class ones. Among working-class callers, only 8 percent of both black and white appointment-seekers received offers.

However, only 30% of Black Americans are likely to seek any form of treatment, when experiencing significant psychiatric symptoms, compared to 45% of white Americans.  In 2017, suicide was the second leading cause of death for African Americans, ages 15 to 24.

Making treatment more affordable
The cost of treatment may be prohibitive for many, especially among those without insurance coverage. Many low-income individuals can find help in the community health system, but such systems may suffer from a lack of clinicians able to treat complex and less common conditions. It can be especially difficult to find care for those who lack any sort of insurance, have an unstable living situation, or who must contend with the inability to make appointments due to overcrowding.  Individual practices and treatment centers can help by publicizing effective low-cost treatment options (i.e., practicum students/interns, sliding-scale slots, etc.)

Increasing awareness of mental disorders and treatment options
Education about mental disorders and the treatment process is critical to reducing barriers to treatment among the African American community. Suggestions for overcoming this barrier include public education campaigns (e.g., mass media), educational presentations at community venues (e.g., black churches), and open information sessions at local mental health clinics. In fact, many black churches are taking the treatment to where the people are and hiring licensed therapists to work with their flock.

Transparency
For those who do start treatment, the first clinical encounter presents an important opportunity to address skepticism about the usefulness of mental health treatment. It’s the clinician’s responsibility to demystify the process and explain the benefits of staying the course. Without this knowledge, the participant may only assume what he or she may encounter and base their decision to follow through on incorrect assumptions. If the expected outcomes, number of sessions, and potential goals are clearly outlined in advance, there is lesser chances of feeling misled or not in control.

Making mental health a priority
Treatment has the potential to conflict with many daily activities or commitments for busy people. Many individuals take second and third jobs to make ends meet. Whether the individual feels treatment is a necessary priority despite prior engagements, transportation, or scheduling issues is an important positive step.

Including the family
Actively incorporating the family is another crucial measure in overcoming barriers to treatment. By gaining familial support, the client may start to lose the fear of being outcast or stigmatized. In addition, with the family’s acceptance, making time for treatment becomes easier and priorities may be put into perspective. Utilizing the family to emphasize the importance of good mental health creates more allies to emphasize the relationship between improved functioning and greater success at home, community, and work.

Reducing fears about therapy and stigma
Making psychotherapy less intimidating may be one of the most important ways of improving help-seeking. Careful use of language can help to reduce some discomfort surrounding mental health care. For example, many clients are more comfortable with the term “counseling” over “psychotherapy” (Thompson et al., 2004), and this should be considered in advertising and conversational exchanges. Another practical way to reduce fears is to offer free initial  assessments, screening/intakes, and phone consultations, which will help familiarize potential patients with the clinic, clinician, and treatment. Clinicians might use initial contacts to address fears of being involuntarily hospitalized by explaining the difference between typical mental health challenges and “being crazy,” which has often been brought up as a concern.

Provider Bias And Inequality Of Care
Conscious or unconscious bias from providers and lack of cultural competence result in misdiagnosis and poorer quality of care. Black Americans, especially women, are more likely to experience and mention physical symptoms related to mental health problems. For example, you may describe bodily aches and pains when talking about depression. A health care provider who is not culturally competent might not recognize these as symptoms of a mental health condition.