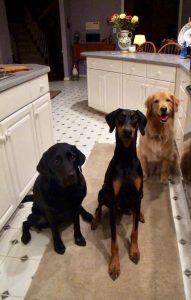 Human eyes are somewhat distinctive in the animal kingdom in that the sclera is very plainly visible whenever the eye is open. This is not just due to the white color of the human sclera, which many other species share, but also to the fact that the human iris is relatively small and comprises a significantly smaller portion of the exposed eye surface compared to other animals. It is theorized that this adaptation evolved because of our social nature as the eye became a useful communication tool.

The conspicuous sclera of the human eye makes it easier for one individual to infer where another individual is looking, increasing the efficacy of this important form of nonverbal communication. In fact, when I am doing psychological examinations, I comment on eye contact as a behavioral observation.  Animal behavior researchers have also found that, in the course of their domestication, dogs have also developed the ability to pick up visual cues from the eyes of humans, making them one of only two species known to seek visual cues from another individual’s eyes. Dogs do not seem to use this form of communication with one another and only look for visual information from the eyes of humans.