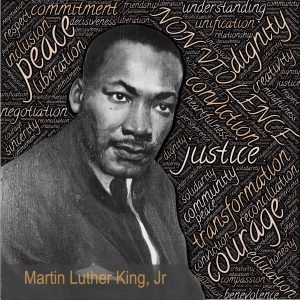 In February 1959, Dr. Martin Luther King, Jr. arrived in India for a five week trip to learn firsthand the South Asian history and strategies that informed the US battle for Civil Rights. Nine years after Gandhi‘s death, Dr. King wrote that he was deeply struck by direct observation of the Indian caste system and the parallels in American conceptions of race. Over 60 years later, caste-based discrimination continues in India, and, exponentially, in Muslim communities In India.

If you get a chance, read Dr. King’s words about his impressions of India, just profoundly beautiful.

South Asian health professionals in North America need to express gratitude for the activism that has reduced racist structures but also to acknowledge the privilege afforded to us by education and profession. Indian, Pakistani and other South Asian physicians and mental health must lead that charge. Asian physicians make up the second-largest majority of all health professions within the United States. South Asian doctors fall around the 15% range. Of these, for example, greater than 60,000 physicians and approximately 10 to 12 percent of entering medical students are estimated to be of Indian heritage in this country.

Like many of our first and second-generation colleagues, our parents were primarily part of a migration from India, Pakistan, Bangladesh, and Sri Lanka. It began around 1965 and increased through the early nineties, thanks to relaxed immigration legislation and increased employment opportunities, many brought about by the Civil Rights Act of 1964, the Voting Rights Act of 1965, and The Fair Housing Act of 1968. The large number of South Asian immigrants who arrived during those years did so as either recent university graduates, or with the scholarship or family funds to obtain an education here on U.S. soil. As a result, South Asian immigrants have been prominent in fields that require extensive and often expensive training, such as medicine and technology.

We the first and second generation children of immigrants can use our education and position to advocate for change. The first thing to do is speak out against racism within our own communities. Although this statement often angers my South Asian community, it would be dishonest to state that we did not witness growing up with elderly community members, outwardly spewing racist propaganda; particularly condemning engaging in romantic relationships or close friendships with Black women or men. I work with a large number of Desi clients, and many feel they must keep their personal lives secret from family, a practice which is painful and ego-dystonic.

As healers, South Asian medical and mental health professionals, must be part of solutions to tackle health inequities for our Black patients. Health disparities in medicine are prevalent in all fields of medical practice. Coronavirus is still claiming the lives of Black Americans at a rate almost 2.5 times greater than Whites or Asians. Black men continue to have a substantially lower life expectancy. As a health community, we must set the goal to help narrow the disproportionate gap in Black Americans’ deaths from coronary artery disease, stroke, diabetes, and cancer. At the least, we should take our skills and funds to contribute to organizations that will help abolish the health inequities that we see daily in our line of work.

South Asians have endured discrimination. Our names are mispronounced, our office lunch mocked, we are stereotyped as doctors or convenience store clerks on many popular shows. We continue to endure micro aggressions from patients, administrators, and supervisors based on who we are. Of the utmost importance now is that we take some of the burden for fighting for persons of color away from our Black colleagues and patients, so they can take a timeout or at least rest.