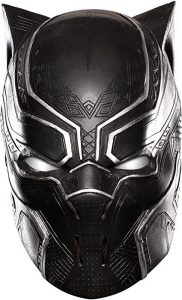 Mr. Boseman embodied the idea that anyone can be a superhero, if they choose. He played King T’Challa, a superhero and leader of Wakanda, in the film Black Panther – which was praised as a cultural milestone for having a primarily black cast and portraying women as more than equal warriors, rulers, leaders, and scientists.

His character was seen as an inspiration for young black people in particular – as Black Panther was the first high-profile black Marvel superhero, and Wakanda was a strong and thriving country with the most advanced technology on Earth. Dozens of young clients I have worked with spoke of Black Panther as a very important influence in their life. Many a time, children came into my clinic wearing a black panther mask.

As tributes pour in for Boseman, who died of cancer at age 43, many are remembering the impact that his character had on them, and their families. In addition to the Black Panther, Mr. Boseman portrayed Jackie Robinson, Justice Thurgood Marshall, and legendary singer, James Brown. He had an exceptional range. Yesterday, we learned that he was a superhero in his personal life, who had been battling a virulent form of cancer, and was quietly and diligently working on his craft and movies between treatments for over four years.

In 1977, psychologist Albert Bandura developed the theory of social learning, proposing the idea that learning occurs within a social context through both observation and direct instruction. Developmental psychologists have stated that social learning theory has applications for the way in which children develop an understanding of morals and empathy. Most famously, Bandura tested his theory using the Bobo Doll experiment, in which adults modeled violent behavior towards a doll and were then punished, rewarded or provided no consequence. Children were then observed to determine if they would replicate the behavior that they observed. At a high level of significance, they modeled the behavior they saw.

It is quite common for superheroes to be presented with the option of whether to fight or not to fight – to use their moral compass, so to speak, before making big decisions. Importantly, these moral dilemmas occur so frequently within comics they give children the opportunity to observe how their favorite role model problem-solves through ethically laden situations. Super heroes ARE role models and facilitate learning. The regal presence and grace of King T’Challa has left an impact on an entire generation of children. And adults.
#WakandaForever