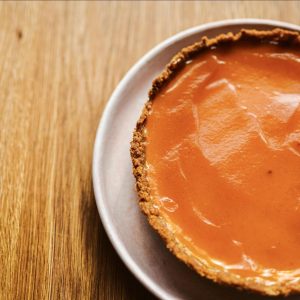 Today, a friend who owns a Lebanese bakery in the Washington DC region sent me a pumpkin and goat cheese tart. The scent is unbelievable. According to neural science/perception researchers at Johns Hopkins University, it is a powerful scent. The smell of this autumn flavor often triggers familiar, cozy memories, creating nostalgia and comfort.

In neuropsychology, this is known as the familiarity effect, or the exposure effect, on brain functioning. Dr. Jason Fischer, from Johns Hopkins Department of Psychological and Brain Sciences found that the more you encounter something and the more familiar it becomes, the more it gets ingrained in your preferences. Seemingly paradoxical, another  psychological component related to desire is scarcity. For 3/4 of the year, we generally do not indulge in the special flavors of pumpkin and fall spices.  Our neural pathways  associate it with a special time of the year.

Cooking with pumpkin also has a storied history throughout the world. It was considered to be a peasant food in Europe and South Asia, commonly used in various dishes, savory and sweet, because it was inexpensive to grow.

Indigenous North American and South American  tribes commonly used varietals of pumpkins and pumpkin seeds for nutrition and health benefits.
  
Pumpkin is frequently used in Indian cooking, and you’ll find it in several vegetarian curry variations, such as the Keralan dish erissery, where it is paired with coconut, and pumpkin oambal, where tangy tamarind is balanced by sweet pumpkin purée. It’s also commonly used in the dessert/sweet snack pumpkin halwa.

Also see The Psychology of Nostalgia.