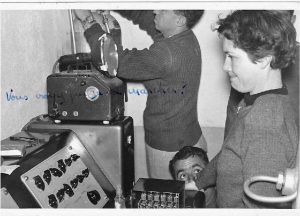 Dr. Anne Beaumanoir was a human rights activist and clinical neuropsychologist/neurologist in France during World War II. Her parents were activists who appreciated education, science, and research as tools to help improve daily lives. Her mother, the milkmaid daughter of an organic farmer, and her father who owned a bicycle shop, were both shunned by their families for their marriage. Together, they opened a popular bistro where they served local food and libations. The bistro was known as a gathering place for intellectuals and the bookish.

Dr. Beaumanoir spent many hours in the family restaurant where she had the opportunity to interact with her neighborhood and community. She helped Jews in her town evade Nazis, once saving two teenage neighbors by arriving at their home just before the Gestapo came to their door, to spirit them away to her parents’ restaurant. Later, she moved to Algeria which was a colony of France in North Africa, and worked with the Algerian resistance movement, doing everything from working as a chauffeur to hotel bellhop.

She completed medical school in France and fell in love with EEG technology. She is one of the first advocates of using EEGs to diagnose different types of seizure activity. Throughout her lengthy career, she emphasized the importance of using medical research to help the less advantaged and was especially interested in cerebrovascular disease and childhood epilepsy. She died in March 2022 at the age of 98, in Quimper, France.  Learn more:  Anne Beaumanoir, Activist and Clinical Neurologist, Dies at 98