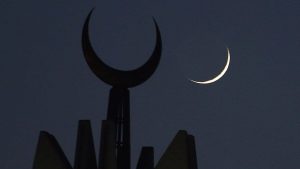 Although there are several definitions, the term “Black Moon” is generally used to describe the scenario when there’s more than one New Moon in the same calendar month. This weekend brings an unusual convergence of events.

*This last weekend of April will be the only universal “Black Moon”. In other words, there will be a Black Moon in every country on Earth.

* Look to the East just before dawn on Saturday, April 30, 2022, and you may see the two brightest planets, Jupiter and Venus, in a detailed conjunction. In fact, they’ll be a mere .2°  away from each other.  You didn’t read that wrong. Almost touching. Ancient writers called these planets the Wanderers. Venus, named for the goddess of love, and Jupiter, the god of the sky, are going on a date. We hope it works out.

* This weekend marks the end of Ramadan for those who practice (Shawwal moon on the Lunar calendar).

* April 30, 2022, will be the year’s first solar eclipse; visible only in Chile and Antarctica.

* Eta Aquarids, an important meteor shower begins May 1, and peaks on May 4, with shooting stars that appear to travel from the star Eta Aquarii, one of the brightest stars within the constellation of Aquarius.

The party in the sky. Humbling and awe-inspiring.