FRANCIS CECIL SUMNER (1895-1954)
Dr. Sumner was the first African American to receive his Ph.D. in Psychology. He was a founder of the psychology department at Howard University,  the first renowned department at a historically black college. Dr. Sumner completed a vast amount of research which delineated racism and bias in psychological studies of African Americans, including in research, testing, and clinical work. Some of his students went on to becoming leading psychologists in their own right, including Dr. Kenneth Clark (below).

KENNETH BANCROFT CLARK (1914-2005)
Supremely gifted psychologist, Department of Psychology, at Howard University in Washington DC. In the famous “Bobo Doll Study” he studied the responses of Black children who were given a choice of white or brown dolls. His findings illustrated that children showed preference for white dolls from as early as three years old. He concluded segregation was psychologically damaging, which played a role in the Supreme Court decision in outlawing segregation. He was also the first black president of the American Psychological Association (APA). 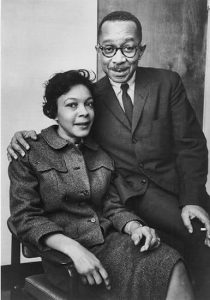 MAMIE PHIPPS CLARK (1917-1983)
Dr. Clark graduated from her segregated high school in Arkansas, at age 17, with honors. She subsequently attended Howard University in Washington DC, where she originally intended to major in math. It was at Howard that Mamie Phipps would meet her future husband, Kenneth Clark, in 1934 (they married four years later).  After struggling with misogyny in the math department, she was persuaded by Kenneth Clark to join the psychology department.

After completing undergraduate and Master’s studies at Howard University, the couple enrolled in the psychology doctorate program at Columbia University, where Clark challenged herself by studying under Henry E. Garrett, a prominent statistician, and unabashed racist and eugenicist. Despite his discouragement, she completed her doctoral thesis work on intellectual development in children. She and her husband became the first black recipients of psychology doctorates at Columbia University, in 1943.

Her work with children showed that African American children became aware of their racial identity as early as three years old. Many of the children she studied began to reflect and internalize the views that society held about them. These findings lead to the later Bobo doll studies conducted with Dr. Kenneth Clark, where both black and white children significantly preferred white dolls over dolls of color, rating them as more attractive and intelligent.